Our children bicker, argue, tease, pick at one another, and sometimes physically fight. In their defense, the physical fighting usually starts in good fun. Someone eventually gets hurt, and it’s taken personally. Then they begin attacking each other without restraint.

It’s a fact of life that if you have multiple children, they will find themselves engaged in one or more of those behaviors. So, what do you do when young siblings fight and argue?

Let’s get started with a few tips on what NOT to do when young siblings fight and argue.

Begin yelling at everyone.

When young siblings fight and you bark louder than them, they tend to switch their attention to you and not the fight they are tangled up in. The downside is that now the kids are even more upset because they think they are all in trouble and not just siblings fighting with each other. Also, yelling at everyone sets the tone that the loudest one wins, which is a terrible dispute settling strategy to teach your kids.

Do yourself a favor and simmer down from the excitement. When young siblings fight, separate the arguing children. When things have cooled off, get the gang back together, explain why it’s not ok to act that way, and move on.

When young siblings fight, we typically blame the oldest more often than we probably should because he “should know better.” The reality is that he is also just a kid trying to navigate his feelings and reactions, and it is unfair to jump on him first when a sibling argument arises.

There is already turmoil brewing when young siblings fight, don’t stir the pot by being just as bad as your kids. Words like, “You are always causing trouble!” and “Why can’t you ever just stop it!” can be more hurtful than helpful to your children. Telling them they always cause trouble sets them up to believe that trouble is all that is expected of them. We don’t want them to think that.

Asking a ridiculous question like, “Why can’t you ever just stop it?” is about as effective as having them explain String Theory. The answer is, they don’t know! As kids, they are navigating boundaries and struggling to remember them. Remind them of the boundaries. Enforce the boundaries. Don’t belittle your child for not remembering them 100% of the time. Chances are, you don’t see the 80% of the time when they do use the lessons you taught them.

Now, on what to do when young siblings fight and argue.

Try not to explode.

When young siblings fight, their bickering likely did not come at the most opportune time. Practice the restraint you want your children to imitate in their own lives. If you are just as fired up as your kids, have everyone separate into different rooms, or even just sit across the room from one another until you’re ready to solve the conflict.

Stop the fight before it gets physical.

If possible, stop the fight before it gets physical. I can usually hear my kids as they engage with each other. From what they say, how they are saying it, and even their physical proximity helps me judge whether I need to step in or give them space to work it out.

If they are already duking it out, quickly jump in. Pull them off of one another and have them sit in a time-out. When the heavy breathing and death stares subside enough to hold a coherent conversation, gather together for the conflict-solving conversation.

Teaching conflict solving skills is golden. Like everything else you will teach them through their childhood, it will have to be taught 5,000 times for it to possibly sink in. Don’t get too disappointed when they have another argument they can’t resolve. When young siblings fight, just go over the conflict-solving skills you’ve already taught them 2,500 times.

Have each child state where they think the problem started. It is usually an accusation of he did this or she did that. Let it play out. You will eventually get to the starting point.

From there, have each child say what they think should happen next. Add in your own parental solutions. Together, you can all discuss which solution best fits the situation.

Ultimately, since you had to get involved, you get to decide the end solution. Which plays into my next tip.

Each child is an individual with their own unique ways of responding to consequences, situations, and criticism. In our case, the ones that bicker the most differ in age by five years, so the consequence needs to be age-appropriate as well.

Sometimes one child is more at fault than the other. Other times, it’s a 50-50 split. On rare occasions, one child is entirely at fault, and the other is innocent. As the parent, you get the fabulous job of determining which is which and then selecting the appropriate consequence or punishment.

A natural consequence is what naturally follows a person’s actions—whether that be inaction or poor decision making. Punishment is more of a penalty for wrongdoing.

The benefit of a natural consequence is that it is more effective than a punishment in guiding a child to remember what follows their bad choices. This will help them to modify their behavior in the future and make better decisions.

I find punishments useful when I cannot come up with a natural consequence that fits the infraction. When young siblings fight and one child punches the other, a natural consequence is that they would get hit back. Obviously, we can’t let that happen. In this instance, I would likely dole out a punishment in the form of making the punching child do the chores of the child that he punched. This is, of course, assuming the child that got punched was innocent in the situation and did little to provoke being punched.

When young siblings fight, we try to let our kids settle their arguments. When it turns into name-calling and belittling each other, we step in. Clearly, they forgot that we don’t do that in our home, or any house for that matter. Not only is it disrespectful, but it sets them up to have poor skills when it comes to solving conflict.

7 clever natural consequences to do when young siblings fight and argue.

What do you do when young siblings fight and argue in public?

It can be volcanically infuriating when your children choose the public arena to hash out their differences. Whether it happens at a grandparent’s house or in the middle of the store, I ask you to muster every drop of restraint that you can. Exploding in public will only make you feel absolutely terrible later on.

When young siblings fight and argue in public, try not to indulge in why they are behaving that way. Your goal is to make it stop quickly and without any loud incidents. If you find yourself at a residence, take the children aside and speak to them. Speak in a quiet voice, so the rest of the house doesn’t hear you, and the children have to pay close attention to hear you. Assert that the bad behavior stops now, and they are to stay apart until they can get along. Any further problems will result in double the consequences at home.

The same goes for when you are at a grocery store or some other errand. Huddle your bickering children around you and assert that the behavior stops now. You do not need to let them explain—you need to keep moving so you can get through the errand and back home as quickly as possible. If you can, stay between the kids to minimize interactions.

Sometimes it’s ok to let the kids explain what was going on. You’ll need to be the judge if it is the right time and place for it.

No one said parenting was easy. We have a natural urge to yell, punish, and act just as bad as our kids when they are infuriating with their ability to fight and argue at the drop of a hat. The difference between the kids and you is that you are the adult. You’ve learned that those childish behaviors solve nothing and to further promote them with your own poor behavior only makes the situation worse.

We have faith in you! Practice patience. Do not jump the gun on punishments, but instead take a minute to breathe and think about the situation and how you need to handle it. You got this!

How do you handle things when young siblings fight? Let us know in the comments below if you have any more great tips for what to do when siblings fight and argue!

Hi, I'm Joe! I'm married to a stellar wife, and together we have four sons and one daughter—our Mini Riches. We don't have much time around here, so let's spend it being good to each other. My wife and I are experts when it comes to managing our large family and our finances while on a single income. Simply put, I want to help your family do the same. 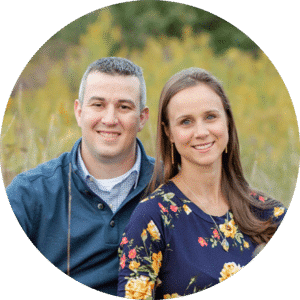 We are Joe and Angela, and we are the creators of Mini Riches. We're a family of 7 trying to make it in this everyday hustle. Join us on our journey as we strive to better grasp the commitments of marriage, family chaos, and financial freedom.

We like privacy. We keep your data private and secure. Don't believe us, bore yourself with our Privacy Policy.
Copyright © 2023 Mini Riches LLC. All rights reserved.
Scroll to Top
Thank you kindly for sharing! Please join us on our other social media accounts!
Follow @MiniRichesBlog
Follow
Send this to a friend